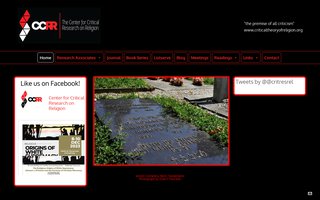 Critical Research on Religion is a peer-reviewed, international journal focusing on the development of a critical theoretical framework and its application to research on religion. It provides a common venue for those engaging in critical analysis in theology and religious studies, as well as for those who critically study religion in the other social sciences and humanities such as philosophy, sociology, anthropology, psychology, history, and literature.

A critical approach examines religious phenomena according to both their positive and negative impacts. It draws on methods including but not restricted to the critical theory of the Frankfurt School, Marxism, post-structuralism, feminism, psychoanalysis, ideological criticism, post-colonialism, ecocriticism, and queer studies.

The journal seeks to enhance an understanding of how religious institutions and religious thought may simultaneously serve as a source of domination and progressive social change. It attempts to understand the role of religion within social and political conflicts. These conflicts are often based on differences of race, class, ethnicity, region, gender, and sexual orientation – all of which are shaped by social, political, and economic inequity. The journal encourages submissions of theoretically guided articles on current issues as well as those with historical interest using a wide range of methodologies including qualitative, quantitative, and archival. It publishes articles, review essays, book reviews, thematic issues, symposia, and interviews.

Daniel Pérez-Zapico, “Electric light and the visualization of Catholic power in Spain during the Restoration Era (1874–1931)”

André Chappatte, “When silence is “yeelen” (light): Exploring the corporeality of the mind in a nocturnal solo zikr practice (Odienné, Ivory Coast)”

Christian Lange, “Eternal sunshine of the spotless mind: Light and luminous being in Islamic theology”

Alex Fry, “Postfeminist, engaged and resistant: Evangelical male clergy attitudes towards gender and women’s ordination in the Church of England”